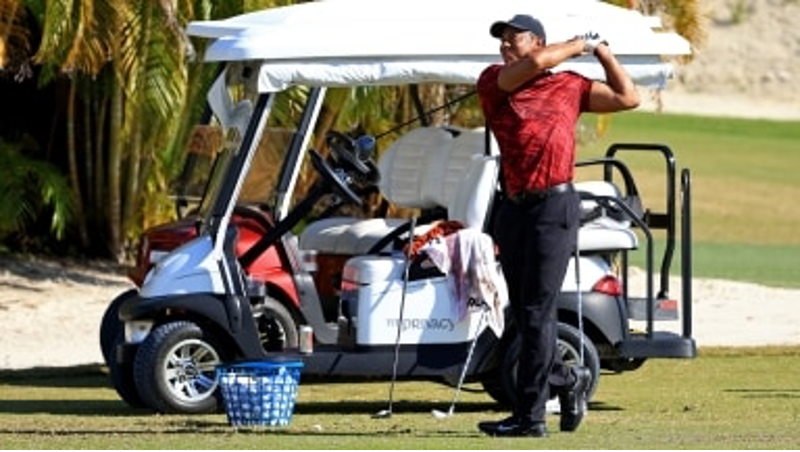 Tiger Woods back in the news of the sporting world after hosting his annual PGA TOUR event, the Hero World Challenge at Albany Golf Club in the Bahamas this past weekend.

Woods spoke live to the media for the first time since his near fatal car accident in February. It was a brief 35 minutes press conference, but also an informative one for the golf world.

One of the biggest takeaways was Woods stating he had a near chance of losing his right leg and that amputation was on the table.

“I don’t foresee this leg ever being what it used to be…,” said Woods in his press conference prior to the Hero World Challenge.

He also touched on the fact he is only around halfway through his rehab process, but has been hitting balls and playing holes. It was a good sign for his fans when he was spotted hitting on the practice range during tournament play. He was even spotted working all the way up to hitting some drivers.

While Woods simply cannot play a full PGA TOUR schedule anymore, he sees himself being able to ramp up for a few tournaments each year when he returns to full health, much like the late Ben Hogan did after his car accident.

“…I think if you practice correctly and you do it correctly that I’ve come off surgeries before that come off long layoffs and I’ve won or I’ve come close to winning before so, I know the recipe for it,” said Woods. “I’ve just got to get to a point where I feel comfortable enough where I can do that again.”

Polls have been taken regarding Woods being able to come back and win a major championship again and 80 to 85 percent of people still believe he will, despite yet another massive injury.

“Well, I think it’s awfully flattering that people think that highly of my game. You know I think I’ve proven that I can play this game at a high level for a long period of time and it’s awfully flattering that they think I can come back from this and win tournaments and win major championships,” said Woods. “For that to happen I have a long way to go. I mean I have a long way in the rehab process of this leg.”